We will take up important Yogic terms from Sūtra-s 1.17 – 20. The terms that will be analyzed in this Unit are – 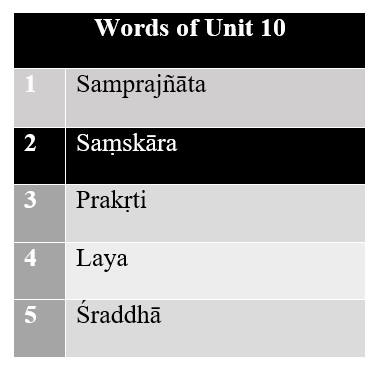 saṃ + kṛ + ghañ= saṃskāraḥ​
The prefix ‘sam’ has been given a host of meanings in the dictionaries[1]. Among them सम्यक् – Samyak – well – is the meaning that has been utilized in the commentaries of Yogasūtra for the current word under consideration.


Based on the above, the derivate statement would be: सम्यक् क्रियते इति संस्कारःsamyakkriyateitisaṃskāraḥ– the act of doing well or simply refinement.

There is no entry for the term in Amarakośa

There are 8 References to the saṃskāra in this text spread in all the four chapters. They are summarized chapter wise.

tajjaḥsaṃskāro’nyasaṃskārapratibandhī .. 1.50 ..​
The first reference (1.50) to the word saṃskāra in this chapter occurs in the context of the asamprajñātasamādhi. In this Sūtra it has been described as a state that is achieved by the practice of total cessation of activities of the mind. And in that state only the saṃskāras – the (weak) impressions/imprints alone remain in the citta. It is to be noted that – impressions/imprints left on the fabric of the citta by the experiences that it undergoes is called as saṃskāra in Yogasūtra.

pariṇāmatāpasaṃskāraduḥkhairguṇavṛttivirodhāccaduḥkhamevasarvaṃvivekinaḥ .. 2.15​
The above lone reference from the second Pāda states that for a wise discerning person all experiences are suffering only. The Sūtra conveys that even while experiencing something apparently pleasant – the seed of suffering lurks in it. In that context we see that pleasant experiences of the present lead to saṃskāra-duḥkha. To explain –– Sadāśivabrahmendra, an 18th century Yogasūtra commentator clarifies–

sukhanāśetatsaṃskāraḥsukhaṃsmārayitvāsmārayitvāhṛdayaṃdahati-​
When a pleasant experience ends, it leaves saṃskāras in the citta These impressions give rise to memory of the pleasure of the past again and again and by this scorch the mind currently, as, those pleasant moments have already passed and such experience cannot be re-lived. This is called as saṃskāra-duḥkha.

There are three references from this chapter to the word Saṃskāra. They are as follows –

saṃskārasākṣātkaraṇātpūrvajātijñānam .. 3.18 ..​
The first reference discusses the nirodhapariṇāma – the changes that happen in the mind during the state of citta-vṛtti-nirodha. It is stated that in nirodha state – the

The next reference (3.10) describes as to how the state of Nirodha is sustained in the mind. It clarifies that – by the virtue of the strength of Nirodhasaṃskāras – the peaceful state of the mind – sans-activity is ensured. Sage Vyāsa clarifies that the strength of Nirodhasaṃskāra depends upon the intensity/effectiveness of practice – to quieten the mind (निरोधसंस्काराभ्यासपाटवापेक्षा प्रशान्तवाहिता चित्तस्य भवति -nirodhasaṃskārābhyāsapāṭavāpekṣāpraśāntavāhitācittasyabhavati).

The third reference (3.18) is in the connection with the attainment of the power of knowing previous births. This Sūtra states that – by saṃyama (dhāraṇā,dhyāna, samādhi) on the saṃskāras (of one’s own Citta?) this capability is achieved.

There are two references to the term Saṃskāra in this chapter. They are described below-

tacchidreṣupratyayāntarāṇisaṃskārebhyaḥ .. 4.27 ..​
Sūtra 4.9 states that – impressions/imprints of past experiences (saṃskāras) and their manifestation as remembering/memory (smṛti) are homogenous in nature – even if they happen far apart in terms of birth, place and time. Hence for example – if a person has to take birth as a specific species in a subsequent birth eg.cow – his impressions during his cow life even in a remote past birth will be kindled by the fructifying karmas.

Sūtra 4.27 states even in a person who has a clear perception of the pure consciousness – sometimes due to previous Saṃskāras the citta may have other distracting thoughts that might lead the mind to worldly plane.

Term not found in these two texts.


Tabulation on Distribution of References in Yoga Texts 10.2​

It is very interesting to note that such an important term like Saṃskāra is found only in the Yogasūtras. In the Yogasūtras also various interesting implications of Saṃskāras emerge. The inputs from the eight references can be arranged in the following manner

2) Saṃskāras invariably lead to smṛti corresponding to it. There will be no deviation or difference even when the two are separated by time, place, birth etc. (4.9)

3) Intensity of imprinting Yogic saṃskāras is directly connected to the duration of calm flow of the mind. (3.10)

4) The very state of experience of Nirodha is Saṃskāra centric (subsiding and manifestation non-yogic and Yogic Saṃskāras) (3.9)

5) Worldly Saṃskāras will always be there in the Citta – even during the state of Samādhi and even in the mind of an evolved souls who have perceived the consciousness (Saṃskārashesha & tachidreshu) (1.18 & 4.27)

6) Saṃyama on Saṃskāras will give special powers as that of knowing the previous birth of the given person. (3.18)

Thus, the study of this term Saṃskāra in the methodology evolved through Śabdayoga has yielded these rich insights that give a better understanding role and implications of Saṃskāras in the Yogic context.

[1] 37 meanings of the word ‘Sam’ with examples can be seen in Avyaya kosha here – https://archive.org/details/avyaya-kosa-srivatsankacharya/page/364/mode/2up?view=theater